In August of 2019, 1,584 professionals in the field of Search Engine Optimization (SEO) took a survey sharing their opinions on the relative use and merit of various inputs in Google’s ranking systems. This report shares the aggregated results of that survey. Each year, the survey will be repeated to show trends of how ranking factor opinions shift.

Respondents were asked whether they believed ranking inputs were fixed in the algorithm’s weighting system, or whether certain types of queries (or all queries) weighted ranking elements differently. 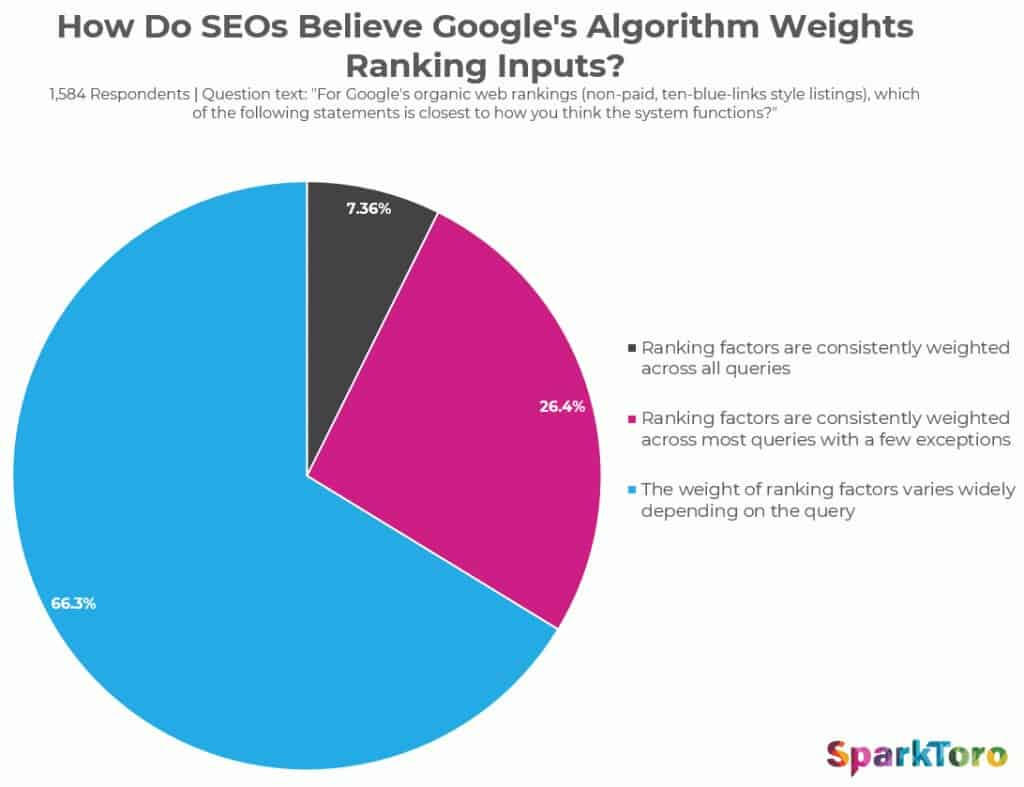 The responses show that nearly 2/3rds of survey takers believe Google has a wide variance of how ranking inputs are weighted depending on the query words used. This makes analysis of the ranking systems vastly more challenging (as a ranking input might be very important for one set of queries, and relatively unimportant for another). Hence, in the ranking input weighting results below, results should be interpreted with knowledge of this potential variance. I.E. SEOs generally believe certain factors outweigh others in importance, but not necessarily in the universality of this ordering.

The question text shown to each participant was the same: “For each of the following factors, enter your opinion of how much weight it receives in Google’s organic ranking systems (the classic, ten-blue-links style results).”

Participants in the survey were given a 0-10 scale to rate each of 26 ranking factors with the following labels: 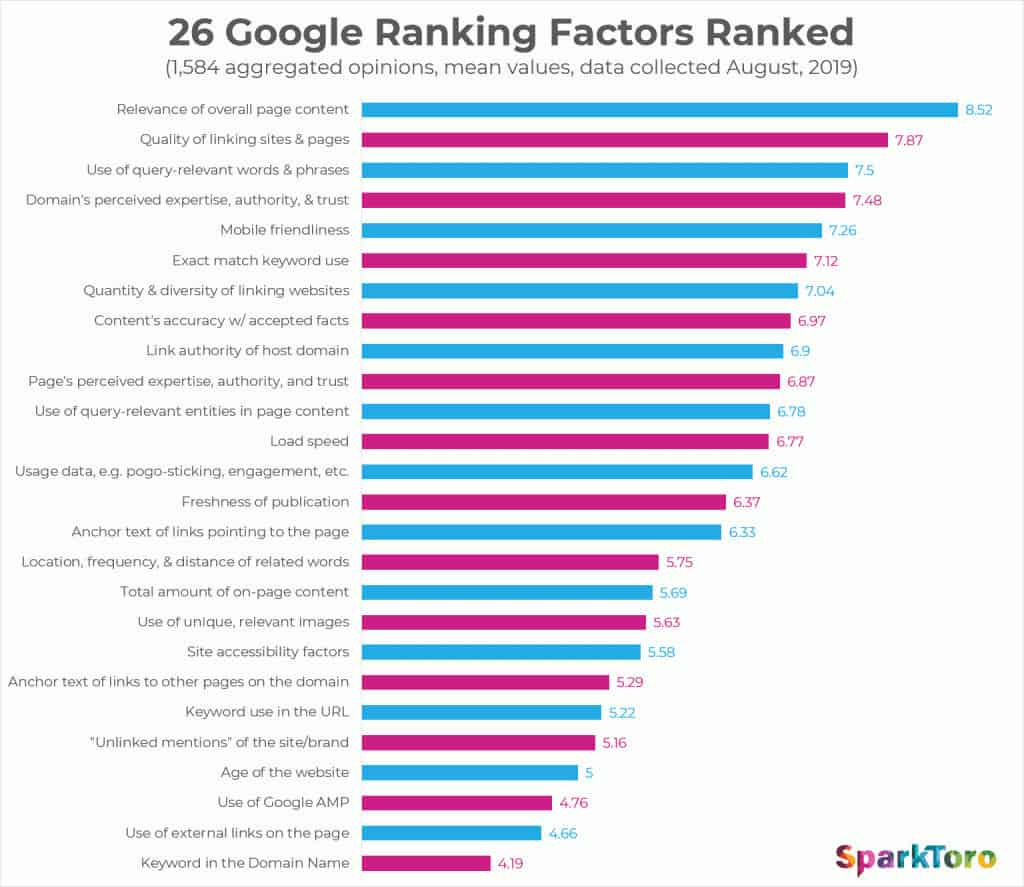 Consensus vs. Variance of Opinions

Using standard deviation, we can see how on some factors, survey-takers generally agreed (i.e. their responses were tightly clustered around a number) vs. had more disagreement (i.e. responses were spread out). The visual below ranks the factors by level of disagreement. 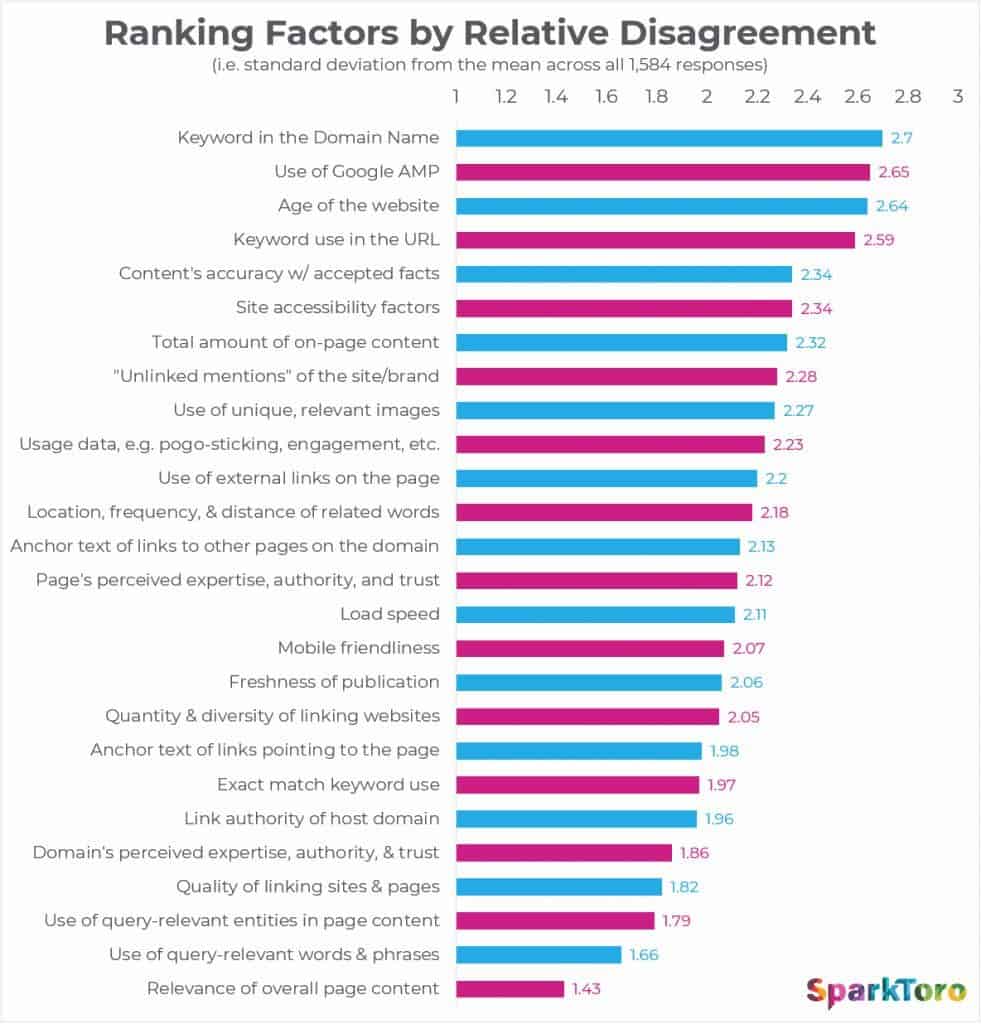 As might be expected, there’s relative consensus around the top ranking factors (“relevance of overall page content,” and “quality of linking sites & pages”), and more disagreement toward the bottom of the list. This suggests that some SEO practitioners still feel very strongly that factors like keyword-use in domain name, and age of website are powerful influencers, while others think they have little to no impact.

Most interesting to me was the relatively high disagreement on two factors in particular: “Use of Google” AMP and “Content accuracy with accepted facts.” Given that both of these are, in my opinion, used situationally in the ranking algorithms, the high distribution of responses makes sense. One could argue that Google AMP is “all or nothing” factor — in the AMP box on mobile, it’s essential to even being considered, and in all other cases, it makes little difference. A similar case could be made for content accuracy — that it’s used when Google’s applying a high trust parameter to YMYL-type queries, and not applicable at other times.

Comparison of Self-Described “Top 10%” of SEO Professionals vs. All Respondents

Those taking the survey were asked to rate their level of SEO knowledge and experience from “0” (New to SEO) to “10” (Top 10% of the Field). The distribution of those responses is below. 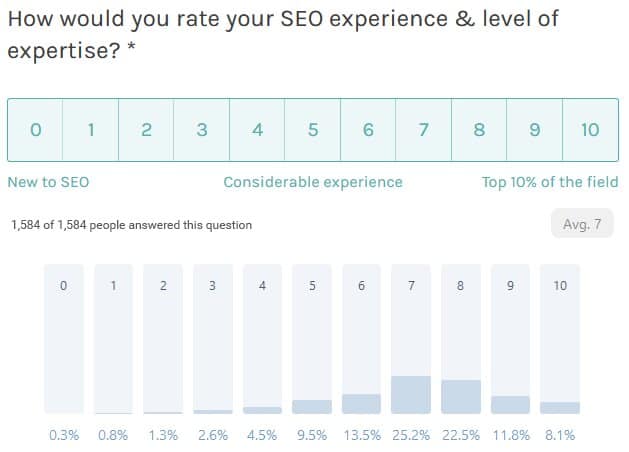 The visual below compares the responses from the 8.1% (129) of survey-takers who said they were in the “top 10%” of the field to the average across all survey-takers. 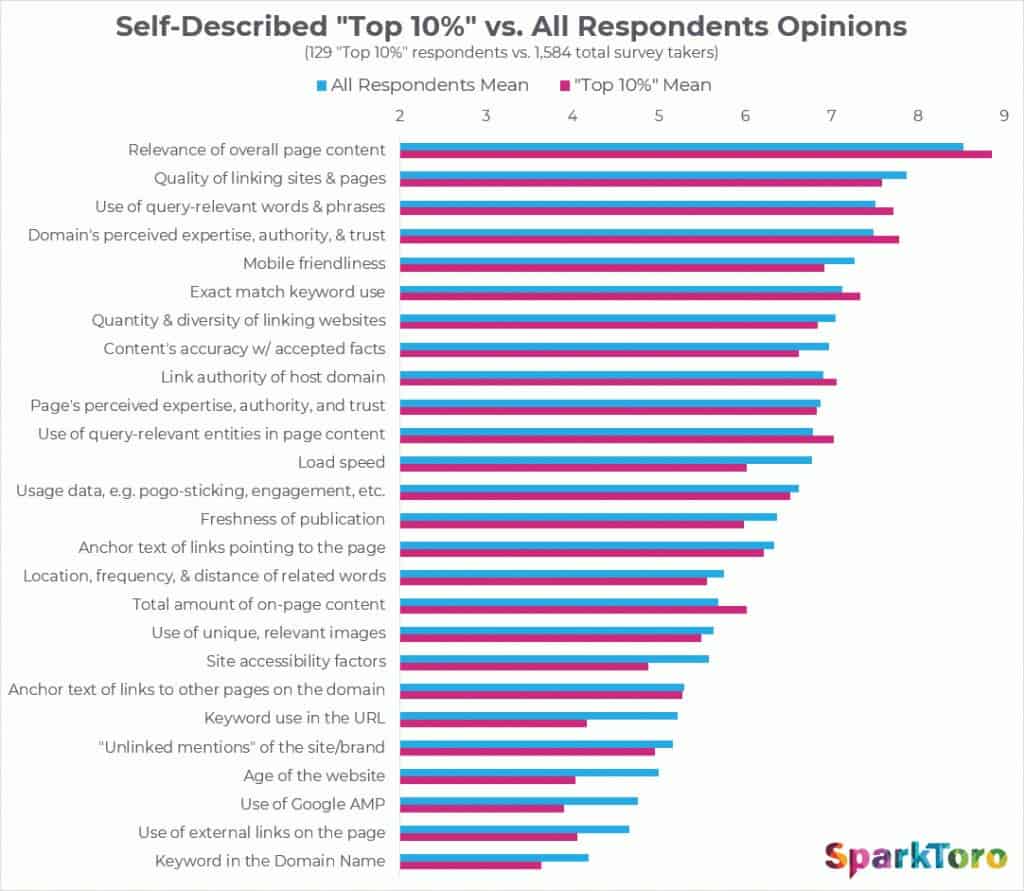 Perhaps surprisingly, the comparison is not particularly striking. The most variance comes on keyword use in the URL (-1.06) and age of website (-0.97). In general, those with more self-described knowledge and experienced rated all factors a little lower than those with less, perhaps evidence that those with greater experience find more complexity in Google’s ranking systems.

Which trends will have the biggest impact on SEO in the next 3 years?

Each survey-taker was asked to rate the following trends based on their perceived impact to the field of Search Engine Optimization (SEO) over the next 3 years.

These results show that professional SEOs generally think Google’s own activities, especially their layout choices in the SERPs (Search Engine Result Pages), their decisions to enter more verticals as a publisher and competitors, and their technological/product advancements will have a far greater impact than any government, competitive, or outside influence.